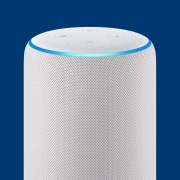 Amazon’s Echo Virtual Assistant (infamously known as just Alexa) functions primarily on the idea of complete voice-control and having a single wake-word which lets these clever little robots know that it’s their time to shine. By saying “Alexa” around your device, it wakes from slumber, listens to your voice request, assists accordingly and then goes back to sleep. But in order for this method to function, Alexa has to have what Amazon call an always-on function.

It makes sense as a principal; having to press a power button before any voice requests would diminish the idea of a ‘hands-free virtual assistant’ and so the only time your Alexa gets a break is when you turn her off at the mains, or when your power goes out. Other than these occasions, she is always ready and waiting to be told what to do.

But this is invoking fear into Alexa users regarding just how much their Alexa’s are really listening to, and where this data is going. Amazon has said consistently that the Echo microphones only listen in and record your voice after the wake-word has been spoken, and that there is even an option to mute all voice-interaction altogether which will turn the outer light ring red when activated. Saying “Alexa” when the Echo is in this state will get no response. But how do we really know that Alexa isn’t listening at all, or if she is just not responding?

The times that Alexa has unwantedly recorded conversations has been because of a trigger word that sounded similar to Alexa, thus triggering the device to commence recording in await of any “play music” or “turn the light off” commands. When these commands aren’t spoken, Alexa will inform you that she didn’t understand what was being asked of her, but still records your voice feedback anyway.

These ‘misunderstandings’ are then reviewed by Amazon’s human team that can depict what was actually being said, so they can put Alexa through a master class in order to help her understand everyone better next time.

Amazon has said – “We take the security and privacy of our customers’ personal information seriously. We only annotate an extremely small number of interactions from a random set of customers in order to improve the customer experience. For example, this information helps us train our speech recognition and natural language understanding systems, so Alexa can better understand your requests, and ensure the service works well for everyone.”

It’s a given that at least some of Alexa’s voice interactions will be taken for analysis, but this isn’t unlike other voice assistants such as Apple’s Siri or Samsung’s Bixby. All speech recognition software must function this way in order to actually function; or Alexa would only ever understand the accent of the person who designed her.

When the Echo’s were first introduced, there were plenty of videos being filmed by users with Scottish accents who would laugh at how little Alexa understood of them. Now – nearly 5 years later – Alexa can pretty much understand every accent, and this is credited to the process of analysing the recordings.

If the idea that your voice may be randomly selected for study purposes unnerves you, then there is always the option to mute your Echo device. This will inhibit any voice-interactive features, but the devices will still work perfectly well as a speaker for playing music.

For those of you named Alexa, or those that simply don’t like using this name, you can also program your device to respond to ‘Echo’, ‘Computer’, or ‘Amazon’. Otherwise, avoid saying words that sound like your wake-word if it’s not Alexa that you wish to summon.