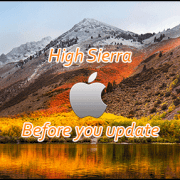 Many businesses will use Apple computers believing that the technology is far superior and less vulnerable to hacking and viruses.

However, reviewers of the latest version of the operating system, MacOS High Sierra, warn Mac users to wait a while before installing it and to make sure they do an external back-up before they begin.

According to The Independent tech reviewer Andrew Griffin, in late September, there are two main reasons to wait a few days before installing: “the risks are much higher and the rewards are much less interesting.”

The danger is that in installation, he says, cherished pictures and other data could be lost, and this will be a catastrophe if the installation is on the owner’s main computer.

The High Sierra system has completely revamped the way files are stored with the intention of speeding up some computer tasks. But the question is whether the new system is quite glitch-free.

MacWorld’s Dominic Preston has compared the High Sierra Version with the previous Sierra version and concluded that it isn’t “the most exciting” MacOS upgrade.

On the subject of the revamped file system MacWorld’s review says:

“First of all, copying files and finding the size of files and folders should now be near-instantaneous, the sort of small improvement that will add up over long-term use.

It also helps keep files safe thanks to built-in encryption, data protection for power outages and system crashes, and simplified data backup. It’s also compatible with HFS drives and data so you shouldn’t lost anything during the upgrade – though we’d still always recommend a backup first.”

Preston’s conclusion is that there is little reason to not upgrade to High Sierra, but he, too recommends a back-up just in case.