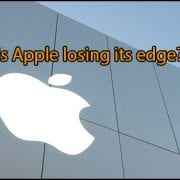 Apple laptops and desktops are often the favourite hardware for businesses, partly for quality and partly because they have always been seen as largely hack-proof.

But a recent problem has caused some technical writers to question whether the “big A” is beginning to lose its edge.

A flaw was discovered in the most recent version of MacOS High Sierra, that enabled anyone to enter the machine without a password.

The bug was discovered in late November by a Turkish developer, who discovered that entering the username “root” and leaving the password field blank, hitting “enter” a few times, he could gain access to the machine.

The vulnerability, which fortunately could not be used remotely, could give someone with root access more powers than a normal user, for example to read and write files to other accounts.

More seriously a superuser with root access and with malicious intent could have deleted crucial system files, rendering the computer useless – or install malware that might be undetectable to typical security software.

Apple issued a temporary workaround by allowing users to set a root password while it fixed the problem.

The instructions are here

However, according to the tech publication WIRED, there were more problems when Apple rushed out a patch, within 18 hours, and users discovered that the “root” bug returned if they updated to the 10.13.1, version.  The machine had to be re-booted for the patch to work, but Apple had not included this in the instructions.